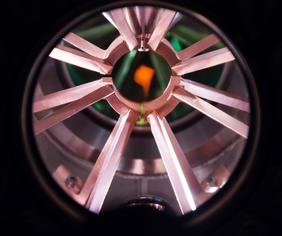 Ultracold atomic cloud of rubidium atoms used in this experiment: The fluorescence that occurs during laser cooling can be seen. Photo: AG Ott

The transport of energy between atoms and molecules is the basis of all life. It is based on interatomic forces, the so-called dipole-dipole interaction. Prof. Dr. Herwig Ott's research group at the Technical University of Kaiserslautern (TUK) has now succeeded in reproducing such a transport mechanism in a disordered system. To do this, the researchers experimentally observed the quantum mechanical interaction between different Rydberg atoms. In this way, they were able to reconstruct the influence of disorder on the distribution and mobility of the excitation energy between the atoms. The scientific journal "Nature Communications" has published the results.

Photosynthesis, for example, illustrates how energy is transported between atoms and molecules: when light hits a cell, its energy is first absorbed by a molecule and then transported between many other, disordered molecules. When this energy package finally arrives at the so-called reaction centre, it is permanently stored in the form of a chemical conversion.

To better understand such transport mechanisms, the research team chose a special experimental approach and entered the quantum regime: "In doing so, we overcame several technological challenges," explains Carsten Lippe, lead author of the study. "This can be seen just by looking at the necessary framework conditions: At an ambient pressure that is about 1000 times lower than in space around the ISS and at temperatures close to absolute zero, some atoms are excited by irradiation with lasers and put into a so-called Rydberg state. In this state, where an electron is placed in a distant orbit around the nucleus of the atom, the atom is about 10000 times larger than in the normal state."

This gigantic size makes an atom in the Rydberg state very sensitive to other such atoms, thus allowing interactions between atoms to be studied experimentally that would otherwise take place on much smaller length scales.

In their experiment, the researchers have now used different laser systems to successively create two different types of Rydberg atoms and investigate the energy transport between them. In the process, they have discovered quantum physical effects that contradict our everyday imagination. "Classically, one can imagine such a transport process as a hopping process. The energy or excitation jumps back and forth between the molecules. In quantum physics, this is different due to the so-called superposition principle: The excitation can, for example, also hop to several molecules at the same time and thus be transported much more efficiently in the system. This is called coherent transport," says Ott.

The researchers were able to show that the proportion of classical hopping and coherent transport can be adjusted in a controlled manner in the experiment. This is done by tiny changes in the wavelength of the excitation lasers used. "Normally, quantum physical effects are fragile and disappear as soon as perturbations are present, such as those caused by the atomic disorder in the gas in the present system," says Thomas Niederprüm, who led the work together with Ott. "The fact that these effects could be observed in the study can help us to better understand other complex systems. In this context, the interaction between the Rydberg atoms can be transferred to other areas of current research, for example to the absorption the transport of light in molecules during photosynthesis. Recent studies have shown that quantum mechanical effects also play an important role in photosynthesis and that the energy transport takes place surprisingly loss-free despite the disorder.

The work on this study took place within the framework of the collaborative research centre OSCAR ("Open System Control of Atomic and Photonic Matter"), in which TUK is jointly funded with the University of Bonn by the German Research Foundation. The results of the measurements and simulations as well as a description of the experimental setup have been published in the renowned journal "Nature Communications":