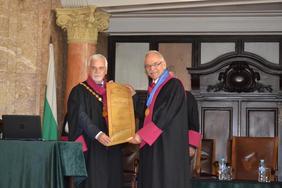 The University of St. Kliment Ohridski in Sofia/Bulgaria has awarded Professor Dr. Klaas Bergmann from Kaiserslautern an honorary doctorate. With this award, Sofia University not only honours Bergmann's research achievements, but also in particular his commitment to the integration of colleagues from Eastern Europe into the European research landscape. Until 2015, Professor Bergman conducted research at the Technical University of Kaiserslautern (TUK) on laser processes with applications in the field of atomic and surface physics.

Shortly after the fall of the Iron Curtain a good 30 years ago, Bergmann decided not to expand the previously diverse cooperation with colleagues from the USA any further. He wanted to seek contacts in Eastern Europe. He knew from visits in the 1970s and 1980s to Hungary, Latvia, Russia and Poland that the scientific education there was excellent. Moreover, it was recognisable that after the fall of communism in 1990, many young colleagues left these countries to work in the West.

From 1996 onwards, a large number of scientists, often accompanied by their students, from Riga/Latvia, Kiev/Ukraine, Sofia/Bulgaria and Yerevan/Armenia were guests of his for several months each year over many years. Prof. Bergmann made a point of ensuring that his colleagues returned to their home countries after their stay at TUK. Many of his guests have since reached leading positions in science and science policy in their home countries. Close contact continues to exist with the locations mentioned, especially with Kiev and Sofia. The visits of the guests from Eastern Europe were scientifically very fruitful for both sides. They were generously supported by the German Research Foundation and the Alexander von Humboldt Foundation.

Professor Bergmann received his doctorate from the University of Freiburg in 1972 and, after a stay at the University of California at Berkeley, moved to the Technical University of Kaiserslautern in 1975, where he habilitated in 1980. He was active in the physics department at TUK until 2007, and then held a senior research professorship until the end of 2015. Since 2017, he has been working in industry in the field of laser measurement technology.

Bergmann has held several speaker positions at TUK, was a member of the university council from 2003 to 2008 and was on the board of the State Research Centre for Optics and Materials Sciences (OPTIMAS) until the end of 2018. He has received a number of scientific prizes and honours, including the Max Planck Research Prize for International Cooperation in 2003 and the Order of Merit of the State of Rhineland-Palatinate in 2005. In 2020, the American Physical Society honoured him with the Davisson-Germer Prize 2020 for Atomic and Surface Physics for the development of the STIRAP method, which is now used worldwide. The prize is considered one of the highest awards in this field. The previous 27 prize winners from the field of atomic physics include five later Nobel Prize winners. Bergmann is only the third non-American to receive the prize.

The Senate of Sofia University had already decided to award Bergmann an honorary doctorate in December 2019. Due to Corona, the ceremony to present the certificate was postponed several times. Now it took place on 27 May.