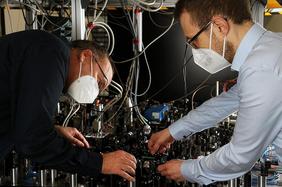 Physicists at the Technical University of Kaiserslautern led by Professor Dr. Herwig Ott have succeeded for the first time in observing collisions between highly excited atoms, so-called Rydberg atoms, and atoms in the ground state. The special feature: They can precisely identify the energy states of the individual atoms. This was not possible until now. For this purpose, the researchers have developed a special microscope with which they have directly measured the momentum of the atoms. The observed processes are important for understanding interstellar plasma and ultracold plasmas generated in the laboratory. The study has been published in the renowned journal Nature Communications.

In their experiment, the physicists used a cloud of rubidium atoms cooled down to about 100 microkelvin - 0.0001 degrees above absolute zero - in an ultrahigh vacuum. They then used lasers to excite some of these atoms into a so-called Rydberg state. "In this process, the outermost electron in each case is placed on distant orbits around the atomic body," explains Professor Herwig Ott, who conducts research on ultracold quantum gases and quantum atom optics at TU Kaiserslautern. "The orbital radius of the electron can be more than one micrometer, making the electron cloud larger than a small bacterium." Such highly excited atoms also form in interstellar space in outer space and are extremely chemically reactive.

If a Rydberg atom and an atom in the ground state now meet, a so-called inelastic collision occurs. "Here, the ground-state atom dives deep into the orbit of the Rydberg electron," he continues. The ensuing molecular dynamics of the two atoms is highly complex and leads to their separation, with the electron's orbit having changed.

"In this change of state, both the principal quantum number and the angular momentum quantum number of the electron can change," says Philipp Geppert, who is first author of the study. He further explains, "From the distribution of these final states, we can now gain new insights into atomic collision processes, where both large and small internuclear distances are important."

In this final state, the Rydberg electron returns to an orbit closer to the nucleus. Energy is released in the process. This is transferred in the form of kinetic energy to both atoms involved, which move apart in opposite directions due to conservation of momentum.

This motion can now be observed with an impulse microscope that the scientists developed specifically for the experiment. The basic principle is quite simple: The neutral atoms are ionized with a laser pulse and directed onto a location-sensitive detector with the help of a weak electric field. The point of impact depends on the initial velocity of the atoms and thus indicates their momentum. The microscope can resolve the smallest differences in velocity, making it possible to precisely identify the final states of individual atoms.

The findings help to understand fundamental atomic processes in plasma. This is a mixture of different particles such as electrons, ions, atoms and molecules. Plasma plays an important role in research, for example to study the interaction between particles in more detail. Since it also occurs in space, results from the laboratory can be relevant for astrophysics, for example, to better understand what chemical and physical processes take place in interstellar space.

The work on this study took place within the priority program "Giant Interactions in Rydberg Systems", which is funded by the German Research Foundation. They were carried out in the OPTIMAS (Landesforschungszentrum für Optik und Materialwissenschaften) profile area, which has been funded as part of the state's research initiative since 2008.

The results of the measurements as well as a description of the experimental setup have been published in the renowned journal "Nature Communications": "Diffusive-like redistribution in state-changing collisions between Rydberg atoms and ground state atoms"; Philipp Geppert, Max Althön, Daniel Fichtner & Herwig Ott