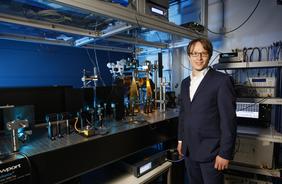 The brain, with its approximately 100 billion nerve cells, called neurons, processes sensory impressions in fractions of a second. The neurons are closely interconnected by synapses. Researchers are using the brain as a model for neuromorphic computers. However, the complex connections required for this are limited by current hardware. A new project aims to change this: information is to be transmitted with the help of magnons, the quantum particles of spin waves. Junior professor Dr. Philipp Pirro from the Technische Universität Kaiserslautern (TUK) has been awarded a 1.5 million euro ERC Starting Grant by the European Research Council (ERC) for five years.

The human brain is extremely complex: Information is transmitted between neurons via synapses. Researchers have taken the brain as a model to construct particularly effective computers, so-called neuromorphic computers. Here, too, artificial neurons are highly interconnected via artificial synapses. With the help of such computers, data processing should be significantly accelerated in the future, which is important, for example, for autonomous driving or the recognition of patterns in complex databases.

For this system to run smoothly, the technical design of the synaptic connections is crucial. "They are very complex, so it is difficult to realize them with conventional electronic circuits," says junior professor Dr. Philipp Pirro, who conducts research in the field of magnetism at TUK.

The team led by the physicist from Kaiserslautern is working to overcome this problem. To do so, they are relying on spin waves, the collective excitations of spins in a magnetic material. Spin is the intrinsic angular momentum of a quantum particle, such as an electron or proton. It thus lays the foundation for magnetic phenomena.

Spin waves are interesting for applications because their quantum particles, the magnons, can transport more information than electrons while consuming significantly less energy.

In the ERC-funded project "CoSpiN - Coherent Spintronic Networks for Neuromorphic Computing," spin waves will be used to enable linking and information transfer. "The principle is similar to broadband communication, where information is transported via light waves. We want to work with spin waves that can transport information at different frequencies," Pirro continued. "They act as synapses." Nano-oscillators will serve as artificial neurons. These are tiny oscillation generators that emit spin waves.

The goal is to develop physical building blocks for a novel spintronic network on the nanoscale. "In this way, we want to lay the foundation for an artificial brain that is as close as possible to the natural model," says the physicist from Kaiserslautern. In the future, such technology could be used to realize faster and more powerful computers, for example.

The work will take place in the new research building LASE (Laboratory for Advanced Spin Engineering) on the TUK campus. Pirro's research is integrated into the OPTIMAS (Optics and Materials Science) profile area funded by the state and the Collaborative Research Center (SFB/TRR 173) "Spin+X - Spin in its collective environment" funded by the German Research Foundation.